There are two objects (in LE terms) in file: code and data.

Virtual size of data segment: 810944
Relocation address: 0xc0000 &lt;- important
Attributes: readable, writeable, has preload pages, nonpermament
Page map index: 0xa2
Page map entries: 0xc5
In file, offset for start of code is 0xa3e00, and offset for data is 0x144e00. From now on, each offset I write will be relative either to code or data start, depending on context.

PC version of SWOS was written as a conversion from Amiga. It can be deduced by analyzing the code, and there are even some left over strings such as &quot;INSERT BLANK DISK IN DF0:&quot;. There are 15 memory locations (dwords) that are used as registers. Their start is at 0x3146d. These dwords correspond to Amiga&#039;s MC68000 processor registers: data registers D0-D7 and address registers A0-A7. This is not a mistake (15 locations for 16 registers) because register A7 (stack pointer) is mapped directly to Intel&#039;s esp register. This means that PC version of SWOS is using so called static emulation, where whole program is translated into host machine language and then executed. Other type of emulation is dynamic emulation, where an interpreter is used that interprets original code run-time (this is the way most emulators operate). Since SWOS is a commercial game, it was more feasibile to use the first approach. I think they did the following: first Amiga&#039;s source code (which I believe was mostly written in assembler, or some optimizing C compiler - somebody correct me if I&#039;m wrong) was converted into C code, probably using some third party utility. Than they rewrited some heavily used routines completely in x86 assembler for speed, and rewrited non-portable routines (file handling, input handling, video) to get fully running x86 executable. Compiler used to put all this together was Watcom C - sw(o)s.exe contains whole Watcom run-time library, both 16 and 32-bit versions.

Consequences of this are that the executable is relatively large. It is also missing bss sections commonly found in other executables, and every static array is put in data section filled with zeroes. Heavy use of memory locations instead of processor&#039;s registers brings to code size explosion. For example instruction:
mov dword [tmp10], aDataEurocup_tm
is coded in 10 bytes: c7 05 91 14 0f 00 2a 73 0C 00 + fixup record while instruction:
mov eax, aDataEurocup_tm
is coded in only 5 bytes: b8 2a 73 00 00 + fixup record.
Some MC68000 registers could be mapped directly to x86 registers to shrink size a little.
For sound AIL (Audio Interface Library) version 3.03 was used. Unfortunately it is commercial software, publicly unavailable, so I didn&#039;t have access to informations about it.

I will enlist some of the most interesting locations in the game, and short descriptions, if available. 0001 means offset is relative to start of code section, and 0002 means relative to data section.
(Note: MC68000 registers are marked as tmp01 - tmp15) 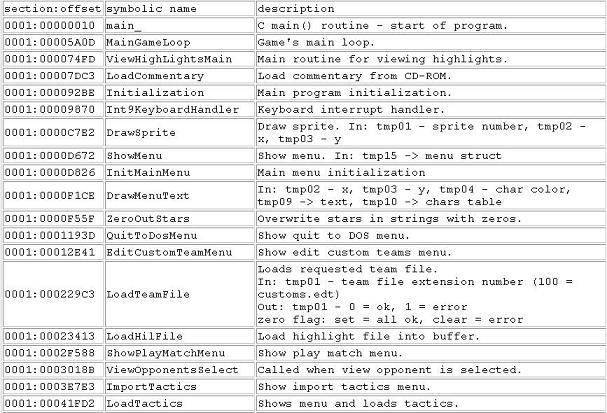 SWOS++ consists of three parts contained in files: patchit.com, loader.bin and swospp.bin. This partitioning was done because of the nature of SWOS executable itself - it is in Linear Executable format. This means that the program is loaded by DOS extender to some, before loading unknown address. Address varies, and is different almost every execution time. Due to this fact, loader must do a process called &quot;fix up&quot;. It consists of adding load address to every reference to data or code, which is invalid - therefore fixing it. To be able to do so, executable besides code and data also contains &quot;fixup records&quot; that are pointing to places that need to be fixed up. Fixup records point to various places scattered around the file, making direct patching by hand extremly labourous - besides patching, fixup records also need to be updated.
First part is program which will patch SWOS executable to allow loading of the rest of the program. After patching, SWOS executable will load loader.bin and execute it. Code itself isn&#039;t very interesting.
Second part is loader.bin. It is in some way similar to boot loader. It will load the main part - swospp.bin, fix it up and do patches to SWOS. swospp.bin has a strict structure, which enables loader to do all this and check file correctness.
Third part is swospp.bin, the main part. This file contains acutal code and data, relocation offsets and patch instructions. It is in custom made binary format.
Whole this process is somewhat similar to functioning of dynamic load libraries in Windows, or generaly dynamic libraries in operating systems.
Most of the code was written in Intel x86 assembler using NASM (Net-wide assembler) and some small parts were written using excellent Watcom C compiler (which was by the way used for compiling original PC SWOS). Because of very flexibile nature of build system even C++, Pascal and perhaps some other comilers could be used too.
SWOS++ binary format makes making patches much easier than before - there is absolutely no need for hex editing. All patching is done after the program is loaded into memory and fixed up by loader, so there is no need to worry about fixup records overwritting code.

Less More
9 years 4 months ago #102482 by swoozh
Replied by swoozh on topic Re: About SWOS - programming knowledge!
Nice topic

Wish we could have the entire swos source code