We are developing a pixel art football game called Pixel Soccer.
It s still quite early in development but we do have a basic match engine built.
We have a very talented artist who is also the guy behind 8bit-football.com 8bit-football.com/ .

I don t think Pixel Soccer is close to Sensible Soccer but rather what Sensible Soccer might look like if made for the first time in this day and age. It will have a similar camera view though.

Love to hear what this community thinks...

Less More
8 years 10 months ago - 8 years 10 months ago #123380 by Retrieving
Replied by Retrieving on topic Re: Pixel Soccer.
any plans to implement aftertouch, calibrated passing and loose control of the ball (aka ball not perennially glued to the players foot)? Otherwise I don t see this game having anything going for it besides the art (sprites are nice but way too big, you might want to factor in some zooming feature otherwise the gameplay will suffer).

Right as of now it reminds me more of a modernized Exciting Soccer rather than a Sensible Soccer remake. Too stiff.

8 years 10 months ago #123382 by ElMichaJ
Replied by ElMichaJ on topic Re: Pixel Soccer.
looks quite interesting

most important is good gameplay

8 years 10 months ago #123401 by SuperRockGames
Replied by SuperRockGames on topic Re: Pixel Soccer.
After-touch will be included in the game, love the ability to bend the ball in Sensible Soccer.

I am not sure what you mean by Calibrated Passing . The system I was thinking of was the longer you hold the pass button( one button controls everything in Pixel Soccer ) the farther, higher and faster you pass/shot goes.

I have zoomed in to do the vine clips and screenshots. Planning to zoom to showing a third of the pitch at any one time.

And yes the game-play is stiff at the moment. I wrote a blog post about that superrockgames.tumblr.com/post/79053761755/match-engine-update .
I plan on adding...
1) One touch passing - At the moment its all very programmatic. Player points in right direction. Player stops. Player draws foot back to pass. Player passes. Player watches his pass.
2) Errors - All passes in Pixel Soccer are received by a player. Very few sensible soccer passes actually end up at the feet of the intended player. Usually players have to run after the ball.
3) Speed up the game-play
4) More high passes/Long kicks
5) Headers
6) Crosses
7) Through ball
8 ) Better movement of your team-mates.

Of course great game-play comes from asking for feedback and iterating based on that.
I am trying to respond and keep the discussion going on various forums to get a good picture of what people would like to see in Pixel Soccer. 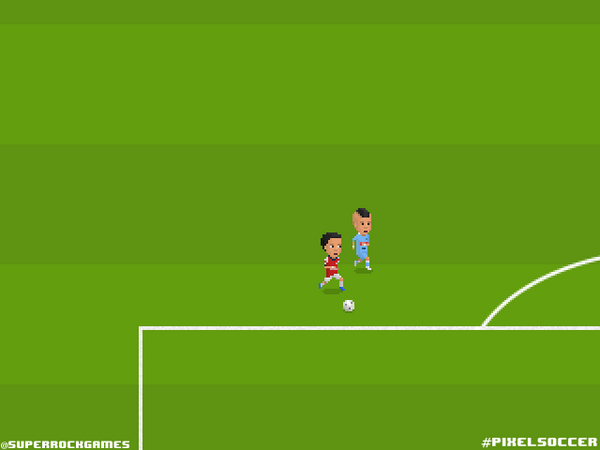 Less More
8 years 10 months ago - 8 years 10 months ago #123407 by Retrieving
Replied by Retrieving on topic Re: Pixel Soccer.
The way I see it you guys got this amazing art-style which could both set your game apart from the mass of half-assed SWOS/Kick Off clones on the market and allow for accessible yet effective players/teams customization which is one of the things that the original Sensi soccer got right back then and had us hooked.

Play it right (and by playing it right I mean, give it a worthwhile gameplay and, possibly, a decent cross-platform netplay), make it go viral (Haxball anyone?) and the game will literally start printing money in no time.

I thoroughly appreciate that the game doesn t claim to be a SWOS/Kick Off wannabe remake or anything and it s trying to be its own thing, we get way too many of those on monthly basis on the app stores due to the feasibility and inherent affordability of mobile-games development and most, if not all, turn out to be just quick cash-grabs with no actual substance in the end and the buzzwords devoid of any significance thrown around by their developers to whore attention for themselves just make matters worse.

Honestly, if the game featured a pixel-graphics editor (think of 3D Dot Game Heroes but in 2D form) which entangled both players likeness and teams kits (out of pre-determined animation frames) I d buy the game just to make my 1996 Urawa Red Diamonds or J.League All-time XI and play around with them. Real talk.

Off the top of my head:

Aftertouch actually allows you to handle long passes, through passes and any shot that isn t chipped with just one feature, which is in my opinion essential if you re planning to use a one-button control system (great choice by the way).

Make it so that players stats (such as, i dunno, aftertouch rating ) actually affect the way a player bends the ball trajectory.

Winning eleven/PES used to be great because, even though there was a lot of freedom of play going on, any action on the pitch was still subject to the players skill ratings, therefore doing something with Zidane as opposed to Di Livio actually made a difference, which added an extra layer of strategy and depth to the gameplay that, say, a Full Manual Next-Gen FIFA match absolutely doesn t have (whereas semi , and auto controls felt heavily scripted).

I d do it this way, ball is less/more likely to get where it s supposed to go upon being passed or lobbed from distance depending on aftertouch and passing skills ratings, then add an area of the pitch (ideally, right outside the penalty box) where also a Through pass skill comes into play (the same way SWOS handles Finishing which increases your likeliness of shooting harder and beating the goalkeeper exclusively when you re within the penalty box).

Of course skill ratings wouldn t have to completely sway the ball, just make it fall a little short of the target or something like that, then when Pirlo does a through ball with perfect timing and execution make it go straight to the player s feet.

Same goes for one-touch passing: make the passing skill rating affect how many 1-touch passes in a row the players involved can handle before mistargetting (personally, much like in SWOS, I d make players stats also affect the reaction times on targets, as in, how quickly the CPU gives you control of the target player and how much they automatically move off of their path to go catch the ball while under CPU control): make 3 1 touch passes in a row with Messi, Iniesta and Xavi and you ll link them 99 times out of 100, attempt them with 3 no-names and you re gonna get the ball out of bounds.

Balancing 1-touch passing is of crucial importance to get a good gameplay imho, make people play into space and force them to be creative about their playstyle by making player-to-player, button-mashing, neverending tikitaka (Next-gen FIFA docet) less feasible.

Also, make the Ball Control skill affect for how long a player can retain control of the ball while running and performing dribblings or sudden changes in direction. The longer you ve been running for, the lower your chances of keeping the ball under control get (perhaps make the ball progressively detach from the sprite hitbox after running for a short while and bounce back and forth off of his feet) until the ball just rolls over and goes its own at the slightest flick of the D-pad (possible countermeasure: a trapping move executed by holding the fire button a la Kick Off 2 that forces you to slow down almost to full stop, making you an easy target for the opponents trying to dispossess you of the ball).

Also, also, you might want to try J.League Excite Stage 96 (SNES - EPOCH) and Football Kingdom (PS2 - Namco) and read the interview I made with SWOS lead designer and producer Mr. Jon Hare of former Sensible Software fame (now CEO @ Towergames) to get ideas regarding useful gameplay mechanics and features.

Less More
8 years 10 months ago #123420 by Playaveli
Replied by Playaveli on topic Re: Pixel Soccer.
Just two sentences:
- Duplicate the SWOS 96/97 ball physics.
- The rest is rather irrelevant and comes naturally.

8 years 10 months ago #123427 by steviebwoy78
Replied by steviebwoy78 on topic Re: Pixel Soccer.
Hey Ammaniel, we really must stop meeting like this!

Good to see you being active in the community re Pixel Soccer.

The guys here really do know their stuff and they re a great resource for appraising your ideas.

Retrieving | Searain s post mirrors a lot of my own thoughts

That is an amazing detailed breakdown of what makes a great football game. It will really be very helpful. It will take me a while to break it down and understand it and I am sure I will be back with more specific questions for you. Goes without saying we will be looking for you to play-test the game!!!!!

@Playaveli - thanks, will have a look at swos 96/97 ball physics

@steviebwoy78 - alright mate! you said it! should have posted here earlier.

8 years 10 months ago #123450 by steviebwoy78
Replied by steviebwoy78 on topic Re: Pixel Soccer.
Agree with Playaveli here (Hej buddy!), physical controller support is a must. Even if you re porting the game to Android/iOS, you absolutely must include support for native controllers. A touch-screen virtual control pad is terrible for footie games.